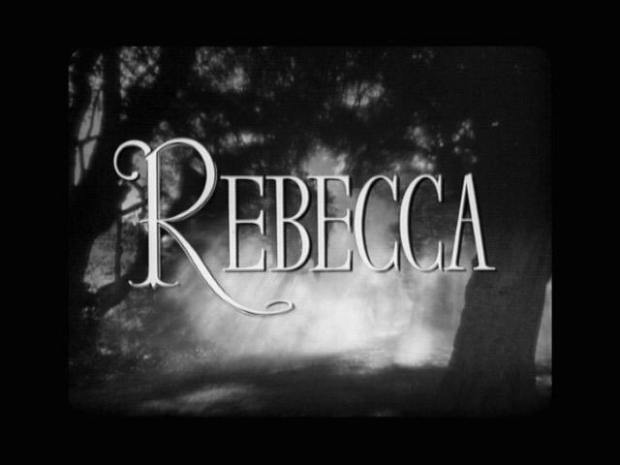 This film has a special place in my heart. It, along with the novel by Daphne du Maurier, turned me onto mysteries and thrillers — something I’ve been obsessed with ever since.

Just to set the bar, we’re talking about a movie that has a 100% rating on Rotten Tomatoes and earned Hitchcock his only Best Picture Oscar. It is a beautifully haunting and tantalizing film, and yet still not as good as the book.

When I was younger and starting to get into Hitchcock, my Mom would talk about the film Rebecca and how great it was, but she could never get her hands on it to watch. When Netflix came out, we signed up right away (it was like destiny), and one of the first films my Mom put on the queue was Rebecca. It was unavailable for YEARS! Finally, after I graduated from college, we were mailed our copy.

At this point I had already read the novel out of anticipation. It delighted me! The scandal was incredibly juicy for something written in 1938, and the psychological horror that was prevalent throughout was amazing. The important twists in plot impressed me. They were both shocking and plausible. It’s a tale of sexual deviance, resentment, and coping with the past.

I see du Maurier’s novel as a bridge between classic gothic literature (like Jane Eyre or The Monk) and the mysteries of today, like Gone Girl. And I maintain that if Hitchcock were still alive and working, he would adapt and direct the film of Gone Girl and it would be his greatest work, but that’s another discussion (I’m very pleased Fincher is on the project). I thought if the film was half as good as the book, I’d be happy, and I certainly was! Unlike Hitchcock’s previous adaptation of du Maurier’s Jamaica Inn, Rebecca ended up being a hit.

The film and novel are told from the perspective of our unnamed heroine, who is wonderfully portrayed by a young, yet to be famous, Joan Fontaine in her first Hitchcock film. A young, simple girl with no real family or name, our heroine finds herself in Monte Carlo accompanying a particularly obnoxious socialite as her secretary. While there she meets the beautiful and tragic Maxim de Winter (played brilliantly by Sir Laurence Olivier); an incredibly wealthy Englishman and the proprietor of the impressive Manderley estate in the countryside. The two begin spending more and more time together until she finds that she’s developed feelings for distant and almost mysterious man. In a rather odd and casual way, Maxim asks her to marry him, and being a girl with little to no means and a storybook crush, she absolutely says yes.

The romance doesn’t last, however, which is worth noting specifically because in the film it does. One of the biggest disconnects between novel and film is the tone. The novel is bleak and menacing, while the film has somewhat of a rosy outlook. When the newly married couple returns to the impressive and daunting Manderley, the new Mrs. de Winter can’t seem to escape the shadow of her predecessor or her husbands unexplained mood swings. Events devolve rapidly as our heroine begins to lose her sanity, no thanks to the devious and terrifying housekeeper, Mrs. Danvers (played perfectly in the film by Judith Anderson). 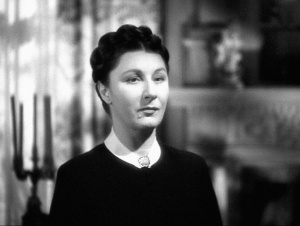 Manderley is large, dank and unkind: the epitome of a gothic haunted house. And it is most certainly haunted by the memories of Rebecca, who seems to have a strong hold on everything even from the grave. No one has been able to let her go after he unfortunate drowning less than a year before. And no one is more obsessed than Mrs. Danvers, who wastes no opportunity to hold Rebecca’s memory over the new Mrs. de Winter. The estate is a tomb. All of Rebecca’s possessions are left exactly where they were before she drowned in the sea. And Mrs. Danvers keeps the house running exactly how Rebecca would have liked it, despite our heroine’s weak attempts at making the place her own.

Frustration grows as the new Mrs. de Winter becomes more and more paranoid that Maxim is comparing her to his dead wife. She can’t handle disappointing him, and she can’t shake this feeling that Rebecca is watching her every move. This downward spiral into near madness is so perfect and methodical in the novel, and while it’s not bad in the film, we don’t feel nearly enough danger or fear. There comes a point in the book where our heroine fears for her life, and we are so deep in it with her that we fear for our lives as well. That’s not as successfully communicated in the film, largely due to the tonal differences in both.

After an incident involving a ship on the rocks off the shore near Manderley, some evidence from Rebecca’s death literally surfaces, and the second half of the film becomes a courtroom drama. What I will fault the film for is allowing the tension to dip during this time. In both the novel and the film, there is a bit of an information dump between the two parts. What’s so great about the novel is that Mrs. de Winter uncovers clues about the mysterious Rebecca while feeling oppressed by her relentless presence. Those clues are a bit glossed over in the film, so to catch everyone up they add more to the information dump. A lot could’ve gone wrong with that scene, but it’s handled the best way it could be and hardly feels overly expository. Unfortunately, viewers are rushed through the court drama that unfolds afterward, where the stakes feel surprisingly low despite the situation. The film lets the information dump act as the catharsis, and focuses very little on what should be a very powerful ending.

In my opinion, the casting for Hitchcock’s Rebecca is excellent. It’s something that could’ve been easily fumbled (and was later on), but Fontaine, Olivier and Anderson all deliver strong performances. While Fontaine was still rather unknown at the time (similar to the Dakota Johnson – granddaughter of Tippi Hedren – casting in the upcoming 50 Shades of Grey film), she holds her own nicely opposite the seasoned Olivier. Some have small gripes with the cast, like Anderson is too young to be Mrs. Danvers, or Fontaine is far too beautiful to be the simple, mousey, introverted narrator, but that’s the nature of Hollywood casting. And the dressed down Fontaine acted sweet and timid enough that I bought her as the narrator. Also, who really is going to say that Anderson didn’t terrify them as Danvers? No one. She’s perfect. 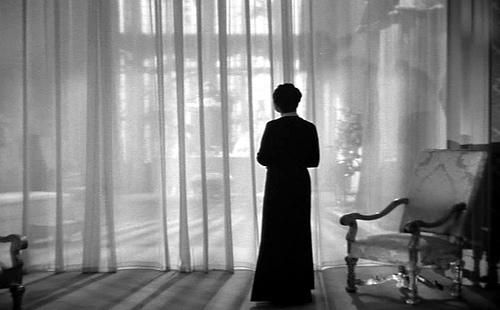 While the film is a successful thriller and excellent in almost every way, it’s not all that Hitchcockian. In fact, the entire film feels as if it owes an allegiance to something higher: the source material. It seems that the focus was to make a great movie that did the novel justice, and if that meant setting aside calling cards and strong personal style then so be it. This is something very rare in Hollywood, and we have producer David O. Selznick to thank for it. He was adamant the film be a faithful adaptation. And as far as adaptations go, Rebecca doesn’t do a bad job.

More major plot points are changed than would be preferable (it’s no To Kill a Mockingbird), but some were mandatory due to the notorious production code that restricted content in Hollywood films at the time. Unfortunately, one very important detail was altered for the film, which caused the tonal difference. While the film is sort of a mysterious romance with a somewhat happy ending, the book is not at all. Maxim is a much more oppressive and menacing character than what Olivier depicts. 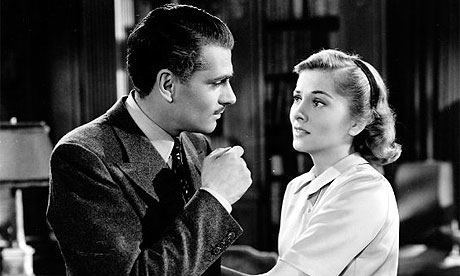 One of the best moments in the film that really gets the tone of the book across is during an ill-fated costume party. Due to a series of events I won’t spoil, Mrs. de Winter is at her wits end. She’s distraught and falling apart, and Mrs. Danvers sees her chance. She begins to subtly hint that maybe our heroine should end it all. She opens a window for her and talks to her in a soothing voice about how much better everything would be for her, and for Maxim, if she just jumped. It’s a spellbinding moment that is guaranteed to have you on the edge of your seat. And if anything Hitchcockian made it into the film, it can be found in that scene.

One of the most interesting things for me is that our heroine and narrator goes unnamed throughout the entire novel. She is referred to as Mrs. de Winter, of course, but other than that she has no identity. It’s an excellent way to let the viewer and reader step into her place. After all, anyone could’ve really been her. The one detail that keeps you calm is that the entire story is being told in the form of a flashback. The novel begins with the excellent line, “Last night I dremt I went to Manderely again.”

As I was rewatching Rebecca, I mused about why there hasn’t been a recent attempt to remake it. And of course, there is! Apparently it’s been in the works for a while, but the latest news from a few months ago is that Nikolaj Arcel who had a hand in adapting the Swedish versions of Girl With The Dragon Tattoo has signed on to direct and assist with the script. Arcel’s recent work, A Royal Affair starring Mads Mikkelsen, got an Oscar nod when it was nominated for Best Foreign Film. If you revisit my post about Hitchcock’s Juno and the Paycock you’ll see that I have strong feelings about the Swedish renditions of the Millennium series, but I haven’t seen A Royal Affair so I will withhold judgement on Arcel’s involvement with Rebecca for now. Hopefully we’ll see a darker version this time.

As I mentioned a bit before, casting is painfully important when it comes to this property. When I was poking around on the internet I found a blog with someone’s dream cast for the remake. It was Carey Mulligan for our heroine, the second Mrs. de Winter, Ralph Fiennes as Maxim de Winter, and an incredibly scuffed up (because she’s way too attractive) Tilda Swinton as Mrs. Danvers. That’s pretty damn good! They didn’t include Rebecca, as she never appeared in the first film and I think we can all agree that flashbacks can be tacky, but if there was a Rebecca in the remake I’d nominate Natalie Dormer (Margaery Tyrell in Game of Thrones). She is exactly how I imagine Rebecca — painfully beautiful with a glint of danger and mischief in her eyes. 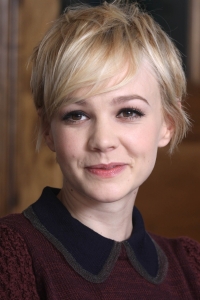