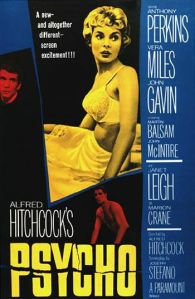 Of course I watched Psycho on Halloween week! Starring Janet Leigh, Anthony Perkins, and Vera Miles, Psycho is based on the novel by the same name written by Robert Bloch and adapted for the screen by Joseph Stefano. I don’t think I need to recap the plot or go into what a fabulous film this is. It’s pretty much universally known, but if you have somehow never seen Hitchcock’s masterpiece, you absolutely need to watch tonight!

Psycho was a game changer in a lot of ways, but I thought it’d be appropriate to stress the role it played in horror films, because, you know…Halloween. With Psycho, Hitchcock helped to create a new genre known as the slasher film, albeit not intentionally. It set a new bar for violence and deviance (sexual or otherwise) in film that was previously not there. This was mainly because the production code that ruled over film content in the decades previous had stopped such subject matter from ever being produced. The restrictive code had recently been thrown out at the time of Psycho‘s production (otherwise it would’ve never been made), but filmmakers were still hesitant to explore those once taboo elements. Psycho challenged the limits of respectability and paved the road for more graphic fair, such as John Carpenter’s Halloween (starring Leigh’s daughter, Jamie Lee Curtis) which opened the door for a flood of slasher films to burst through (such as Friday the 13th).

Leigh in the famous shower scene

I don’t think we saw another major game changer in the horror genre until the infamous The Blair Witch Project in 1999, which spawned the popularity of cheaply made found footage films like Paranormal Activity. Even Blair Witch took a few notes from Psycho, especially in the interest of frugality. I guess you could say that Saw also altered horror films, ushering in a more or less unwanted era of borderline snuff films and horror porn in the mainstream (don’t get me wrong, the first Saw is amazing). If you want to talk about horror films, I will gladly chat with you all day. Just hit me up!

In rewatching Psycho so closely to my favorite holiday, I rediscovered my joy in Hitchock’s accidental magnum opus. The simplicity of it struck me. There are no unnecessary flourishes, it’s just raw. It’s one of the rare films that fully entertains me every time I see it. It even manages to get scarier, which is a difficult feat. While compared to today standards, Psycho can be rather tame. But the horror doesn’t come from the jumps or the gore (of which there is very little), but from the psychology behind it. Norman Bates remains one of the most terrifying villains in film today. His sweet and hospitable demeanor becomes chilling on repeat viewings after learning what he’s really capable of.

Perkins in the closing shot of the film

Hitchcock made Psycho ultimately out of frustration with Paramount and the desire to try something new. After North by Northwest‘s success, that’s all anyone wanted from him. Hitchcock had been in the game for over 30 years at this point, so it’s understandable that he’d want to take a step back and try something new.

Many risks were taken when filming Psycho, from the content to the plot and in the production itself. It was a huge struggle to get Psycho made. No one wanted anything to do with it, and Hitchcock had to finance most of it himself and find cost conscious approaches to production that resulted in the simplistic film we see today. Honestly, if it were made in any other way it wouldn’t have as great an impact on audiences. In a way, the bare-bones film feels timeless, which is why people still watch and enjoy it on Halloween over 50 years later.

The adaptation of Bloch’s novel is one of the greatest ever attempted (in my opinion), and by greatest I don’t necessarily mean better than the book. I mean that the source material (which was altered notably in certain places and kept faithful in others) was molded so perfectly for the film format that it no longer felt like an adaptation, but a perfectly crafted plot for the screen. The novel doesn’t get in the way, but the film isn’t disrespectful in its portrayal of Bloch’s work.

Obviously Psycho has stayed with us over the decades, not just as a distant influence, but as one of those cultural icons that you feel like you were born with. Bates Motel on A&E is a great example of how close we still are to Hitchcock’s work. So if you’re planning a cozy holiday in and you’re having a hard time deciding which gore-fest or camp-palooza to watch, just stick with the classic! You can rent it on Amazon for $3.

I give this Hitchcock an A++! Happy Halloween!