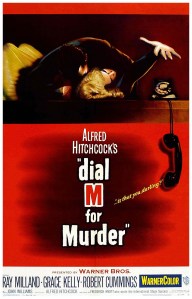 For my first Hitchcock Haul of 2014, I decided to revisit an old favorite of mine: Dial M for Murder. I made a cup of tea, broke out my knitting, and curled up on the couch to enjoy what I think might be my most watched of his films.

Whether you’re a fan of the original or of the modernized adaptation, A Perfect Murder (starring Michael Douglas, Gwyneth Paltrow and Viggo Mortensen), Hitchcock’s simplistic and at times goofy thriller about a man who pays an old acquaintance to carry out the perfect murder is a story many people know and love. There’s no denying that Dial M for Murder is a really good time. It’s been parodied and remade, and the play on which it is based enjoyed a healthy life.

The plot of the film, set almost entirely in one room, is clean, contained, and unexpectedly layered. We watch, completely captivated, while the scheming, gold-digging Tony Wendice (Ray Milland) blackmails an old school chum, Swann (Anthony Dawson), into killing off his wife, Margot (Grace Kelly), so he can inherit her money. We marvel at his calculations, how he’s thought of literally everything. It soon becomes apparent that he’s been crafting the perfect murder for some time now. He almost reminds me of the sociopathic Amy in Gillian Flynn’s Gone Girl, and it’s no secret I love characters with a devious side. 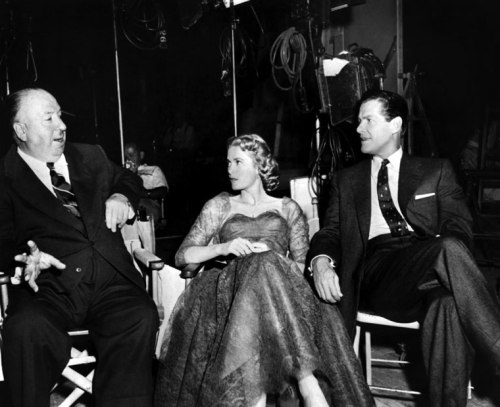 Hitchcock with Kelly and Cummings on set

There’s simple motivation for the murder. Tony knows of Margot’s affair with an American TV writer, Mark Halliday (Robert Cummings), and can’t have her running off with him, leaving Tony penniless. He also doesn’t really want to be married to her anymore. Since he was named her beneficiary, murder is the obvious solution. But it would also be obvious to the police, which is why he’s involved Swann to commit the murder while Tony builds creates an alibi. 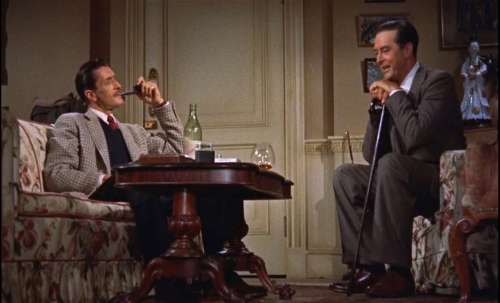 The fascinating thing about this story is that there are no secrets or twists. We know about Margot’s affair with Mark and Tony’s knowledge of it. We know that Tony pilfered of one of their love letters from her hand bag. We know that Margot was bribed by a stranger to hand over money for the letter, and it’s no secret to us that it was her husband. We listen intently when Tony takes his time instructing Swann on how to do the deed just right. We watch in horror (and sometimes in glee at the campiness of it) as Swann attacks Margot, and how she lethally defends herself. We know she kills him in self-defense, but we look on as Tony craftily molds another story, one that involves Swann blackmailing Margot with proof of her affair, and Margot plotting to kill him. We get nervous when Margot is sentenced to death, and the only real tension we feel is in regards to whether she’s actually going to die or not. 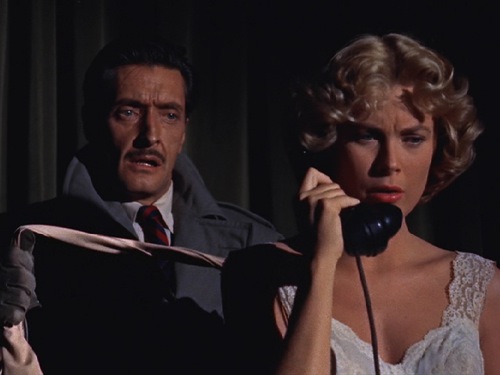 Swann waiting for his moment…

And that’s when it starts to get really interesting. On the day of Margot’s scheduled execution, we watch the distraught Mark struggle to convince Tony to go to the police with a concocted story about how Tony planned the whole murder. Mark has no idea how close he actually gets it, but Tony says the cops will never believe him. Except one cop is already hot on the trail. Chief Inspector Hubbard (John Williams) has something up his sleeve, but at the moment we aren’t exactly sure what it is. It’s clear he doesn’t exactly trust Tony, or the story that put Margot on death row, but we can’t trace his erratic behavior either.

He shows up unannounced and proceeds to ask Tony about money he’s been spending. He then does some strange shit with a key and verbally plants some important information in Tony’s head. What seems like a bunch of random gibberish is actually an elaborate plot to set Tony up. It’s not exactly entrapment, but Hubbard uses his knowledge of human nature and his assumptions about the truth of the case to spur some interesting actions. After a round of, “Let’s see what Tony does next,” Hubbard and Mark, and eventually Margot herself, watch Tony incriminate himself beyond repair. And then we’re treated with another captivating speech about how Hubbard knew Tony was lying, thus wrapping up the film with a generally happy ending. 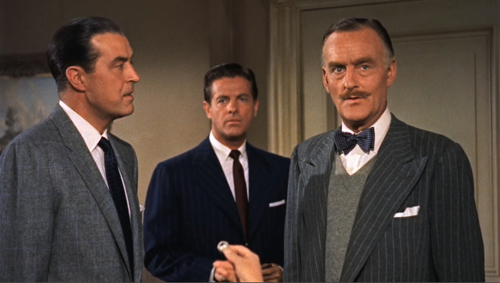 The beautiful thing is that this summary wouldn’t really spoil the film for first-time viewers, except for maybe the fact that Margot is saved, but I think most could guess that. No, the fun in this Hitchcock thriller is diving into the minds of criminals — the planning, plotting, and eventual outcome of devious activity. It’s the unfolding of the process that makes it so interesting.

Dial M for Murder is a favorite of mine because it blends Hitchcock’s penchant for adapting plays (such as Juno and the Paycock) with his updated aesthetic, which I much prefer. And I can never resist the opportunity for a fun thriller or the lovely Grace Kelly’s pleasing affectation. And when I say the dialogue is captivating, I’m not being facetious. The dialogue Dial M for Murder is fucking excellent. Its story structure is fucking excellent. And the mystery itself is very entertaining. All of this credit should probably go to Frederick Knott, who wrote the hit stage play in 1952 and the screenplay for Hitchcock’s film, but the movie itself is beautiful to watch, even if it is mostly contained to one room. In fact, like Rope, that makes it more impressive to me. Unlike some of his earlier play adaptations, Hitchcock has learned how to move in that space and make it all useful and exciting. I haven’t seen all of his films yet, but this (along with Psycho, Rebecca, and Vertigo) is some of my favorite of his directing. All though, this murder sequence is pretty hilarious…

And for a film that is mostly talking, Hitchcock does a wonderful job of keeping the pacing up. This story has been brewing for a while, the ground work being laid years in advance. Tony himself quips to Hubbard that he could have been plotting his wife’s murder for years (which was the truth). But lucky for us, we’ve been dropped down right into the most interesting parts. Even Margot’s trial is short, simple, and slightly artistic. We aren’t bogged down by slow-moving plot or back story, and it’s impressive how seamlessly we’re caught up. 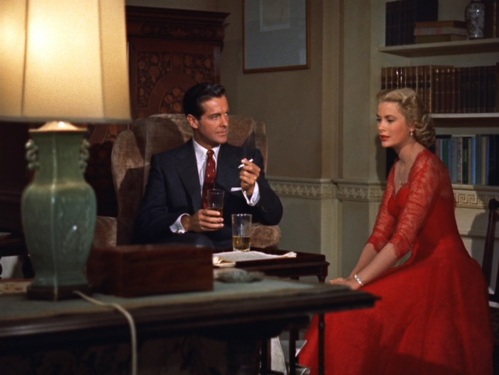 You can watch Dial M for Murder in its entirety on both YouTube and Amazon Prime.