I hope everyone had a wonderful Halloween weekend last week! I know I did. I obviously meant to post this last Tuesday, but my life seems to have grown much busier lately, and I have a harder time fitting everything in. Better late then never, right? So, last year for Halloween I watched Hitchcock’s Psycho. This year, I thought it would be a good idea to watch the other film people generally regard as one of his “horrors”, The Birds. I had never seen The Birds before, and I really had no idea what to expect. The concept seemed incredibly ridiculous, and yet it’s based on a story by one of my favorites; Daphne du Maurier. If you all remember correctly, she wrote the novel Rebecca, which was also adapted by Hitchcock and won him his only Best Picture Oscar.

The Birds opens with a minor (and perhaps adorable) confrontation between Tippi Hedren‘s spoiled socialite Melanie Daniels and lawyer Mitch Brenner (Rod Taylor) in a pet store. Mitch does not approve of her over-the-top practical jokes (that seem to have landed her with criminal charges), and Melanie is both annoyed and fascinated by him. As a form of revenge and flirtation, Melanie buys a pair of love birds and attempts to leave them at Mitch’s door, but when his neighbor informs her that he is out of town for a while, she makes the slightly crazy decision to stalk him out in Bodega Bay up in Northern Cali. She goes all the way out there and tricks locals into giving up personal information about Mitch, his family, and where they live. Not creepy and violating at all. She then proceeds to break into his waterfront house and leaves the birds not for Mitch, but for his little sister Cathy. Sounds like all your exs, right?

Anyway, this is how she gets stuck in Bodega Bay. She stays because a red-hot flame explodes between her and Mitch (obvs), and she just has to get dat ass or something. One little problem: Mitch’s mother (the stunning and fabulous Jessica Tandy) doesn’t like sharing her son with psycho bitches, and rightly so. The tension between the two is palpable, and literally represented by the otherwise nonsensical bird attacks. While Melanie spends time with Mitch and his family, the bird attacks become so violent and intense that the entire town is thrown into turmoil. The town is blocked off and snippets of the phenomenon makes it onto the national news. But no one knows what the hell is causing the attacks or what to do about them, and that’s basically how the film ends it. Ridiculous.

Well, as it turns out, I really disliked The Birds. I seriously hope du Maurier’s story makes more sense than the movie, because the movie felt like it had no direction. I understand that the birds attacking isn’t supposed to have a rational explanation (such as nature fighting back like in The Frogs) and that it’s supposed to be a metaphor, but even that wasn’t very clear. Perhaps if I was in the mood for some strange Freudian experiment I would have enjoyed it more. But as it turns out, I was hoping for a creepy monster fest instead, and that is not what this film is.

The Birds makes little to no sense on a surface level. If you dissect it bit by bit, keeping in mind some of the most advanced psychological concepts in existence, you might find it fascinating and well executed, maybe. Apparently, there is a lot going on in terms of needy women, anxiety and stress manifesting as the random bird attacks, and sexual energy. All I saw were a bunch of obnoxious people living boring lives while also not handling a very confusing and violent situation very well.

By the end of the film, Melanie wanders into a room of Mitch’s house that was not properly fortified against the bird attacks and is subjected to repeated peckings. The pain is just too much, and she succumbs to their will. By that I mean she bitches out and faints in the room. Mitch rescues her, and in the morning they drive out of Bodega Bay while scores of birds watch, calmly perched on things. Huh. 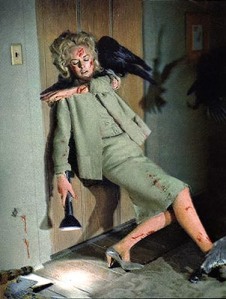 Things I enjoyed about The Birds (yes, there were a couple of those) included the decision not to incorporate a traditional musical soundtrack. Instead, Hitchcock decided to accentuate the sounds of the birds and weather throughout. This created a very unsettling vibe and made me acutely aware of the birds’ presence. I also enjoyed the expert building of suspense. Birds do not scare me, and I find it goofy as all hell that birds would suddenly and randomly attack humans, but Hitchcock’s mastery of suspense actually had me quite nervous near the end of the film. It was also a treat to see Tippi Hedren’s first major starring role. I adore her, but as far as Hedren and Hitchcock go, I have to say I prefer Marnie  over The Birds, and I didn’t really like Marnie all that much.

The final verdict on The Birds is that if you haven’t seen it yet, don’t rush to put it on your Queue. It’s not my least favorite, but it’s pretty close to the bottom.

P.S. – Here’s a little Easter egg for all you X-Files fans out there: Mitch’s little sister Cathy is played by a very small Veronica Cartwright. Also known as Cassandra Spender.