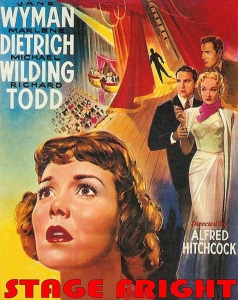 Stage Fright was a fun surprise! I’m not sure how well known this Hitchcock film is, but wow is it fun. I watched it about a year ago, fully intending to write a post, but then grad school started up and I had no time for fun or life. But now I have a bit more time to do both (not like I do myself any favors with my schedule). If you want to see Marlene Dietrich at her most Marlene Dietrich-y, pick this bad boy up.

Although it’s based on the 1948 novel Man Running by Selwyn Jepson, Stage Fright mixes the story up in a few ways. I enjoyed the movie so much that I’m pretty interested in seeing what the novel is about! If you’re interested as well, just know that it was published under many different names over the years so it might be harder than usual to find.

I try to go deeper with my discussion of Hitchcock’d films when I can, but this one doesn’t seem to lend itself to terribly deep discuss beyond the dangers of infatuation and becoming a patsy, but that’s part of its beauty. It’s just a fun thriller with unreliable characters! Here’s the synopsis as best I can sum up (because it gets twisty). Warning, lots of spoilers, but I try to keep the big reveal under wraps… 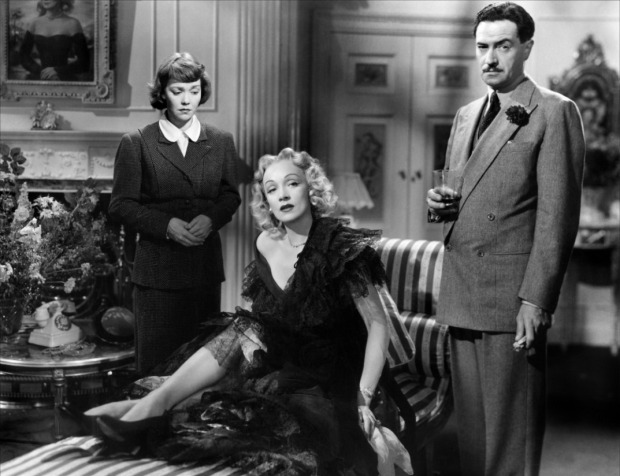 Diva stage actress Charlotte Inwood (Dietrich) arrives at fellow actor (albeit of much lesser-known status) Jonathan Cooper’s (Richard Todd) flat, distraught and covered in blood. She’s murdered her husband…but she had to of course. Now she’s telling him they can finally be together, but he has to go back to her place and pick up a new dress for her to wear asap! She’s expected at the theatre. He does as she says, and he also decides to stage signs of a burglary. While he is doing this he is witnessed by one of Charlotte’s staff, so he flees. Where does he go? Right to one of his Oldest friends Eve (Jane Wyman), who also happens to be hopelessly in love with him despite his not caring about her that way (or even being a good friend). He explains to her what happened, which is how we the audience hear the story, or see the story. 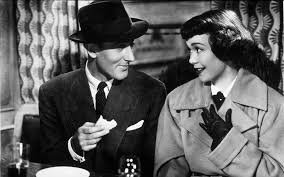 Eve decides to make it her mission to clear Jonathan’s name. She goes undercover in Charlotte’s staff, poses as a reporter to eek out information, and starts seeing the detective in charge of the case, Smith (Michael Wilding). That last part sounds pretty sleazy, but as it turns out, Eve really likes this guy! And he really really likes her. But her involvement forces her to do back flips to avoid being found out by him, Charlotte, and basically everyone else.

Finally it cannot be sustained and she comes clean to Smith. Together they devise a plan to get Charlotte to confess on tape to her crimes, thus letting Jonathan off the hook. They set up a very Scooby-Doo like trap, and it is successful…to an extent. 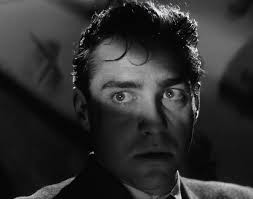 Ok, now remember everything I told you in the first paragraph of the synopsis? Basically throw it out. Nothing that Jonathan told Eve can be trusted. I won’t spoil all the particulars, but  Eve finds herself in a very precarious situation, stuck in the bowls of the theatre…aaannnddd I will leave it there for you, my lovelies. I shan’t spoil this one!!

So I began to think about this one beyond my initial enjoyment. How far would you go for someone you were head-over-heels for? I can tell you right now that if my fiance ran home one day, covered in blood, asking me to help him with a sticky situation, I’d probably help out. I of course love him, think I know him pretty well, and respect his character. I also know that his respect for me is returned, and this is the important part of the equation. He respects me too much (I hope) to pull me into a deadly situation without telling me the full truth. And he probably wouldn’t do anything awful that wasn’t justified. If he came to me telling me he was framed or did something out of necessity, hell yeah I would believe him.

If the emo scene guy I had a huge crush on when I worked at American Eagle in college, who strung me along forever and treated me like crap, came to me with the same request, my rational now-adult brain would be like GIRL, YOU IN DANGER! This is because he didn’t respect me. This was evident in his treatment of me. But would I have reacted that way then? Probably not. I was twitterpated and would have been honored just that he thought to trust me with something so important. This is how a lot of good people get wrapped up in really horrible situations.

When I thought too hard about this, I just exhaled really loudly and thanked my lucky stars that I grew up (unscathed) and ended up in a really great place NOT being framed for murder or dragged into a best selling true crime novel.

I had no idea Stage Fright existed until I was looking up Hitchcock films at my library. If you are looking for a really fun, underrated older movie for a low-key movie night…snuggled in your pjs…hot toddy in hand…cat actually sleeping next to you and not being a maniac for once…this is a great choice! And let me know what you think.