Joy Harjo, looking like the amazing badass that she is.

This RA was for myself. I grew up in the Finger Lakes region, right in the middle of Haudenosaunne (Iroquois) territory. The Onondaga Reservation is a bout 40 minutes from the house I grew up in. They are The Keepers of the Fire, which means that in the metaphorical longhouse that the Six Nations create together, they are the central group. Physically, they are in fact central. This means that when larger events happen that include other member tribes, they usually happen on Onondaga territory. The Onondaga Reservation more or less acts as the capitol of the Iroquois Confederacy. I had excitedly planned to run the Trail Run 5k they host on the res for Thanksgiving this year, but I ended up deciding not to go home for Thanksgiving all together. I will absolutely run it next year, however, because I don’t really go to the res that often and it would be nice to run through it. Also, the registration cost for the race goes to the reservation, as far as I know. And who doesn’t love running a 5k at the ass-crack of dawn in super cold Central New York in November while potentially hung-over?????????????

Being from New York, where the Iroquois Confederacy (the original democracy in North America) and the Six Nations are still very influential, I could find and experience native and indigenous culture pretty conveniently. We have amazing museums, reservations that do programming, people with native roots who are willing to teach and educate the rest of us…it’s great! Well, I took that for granted (understatement). Pennsylvania does things differently.

Before I dive in to this post further, hit play on this badass #FeministFriday playlist crafted by Spotify and populated entirely by indigenous female musical artists. It’s fucking amazing. Enjoy while you read:

This month I was charged with curating our Native American Heritage Month display in my library. I wanted to do a cool map of Pennsylvania with the general area of where tribes originally lived from like 1400-1700(ish) marked and important information on their culture and where they were now. HA. HA. HA. This was a hard task. Pennsylvania does not have any reservations or federally recognized tribes. There are no easily accessible, tidy maps that show this history or celebrate the state’s native roots. I called the Pennsylvania Historical Society and the federal government; no one could help me. It was embarrassing (for them). I had to recruit my mom, librarian goddess, to help me research this. She eventually found some great maps from the Library of Congress that, along with my encyclopedias, allowed me to pull something together. It’s nothing fancy, but I’m pretty happy with how it came out: 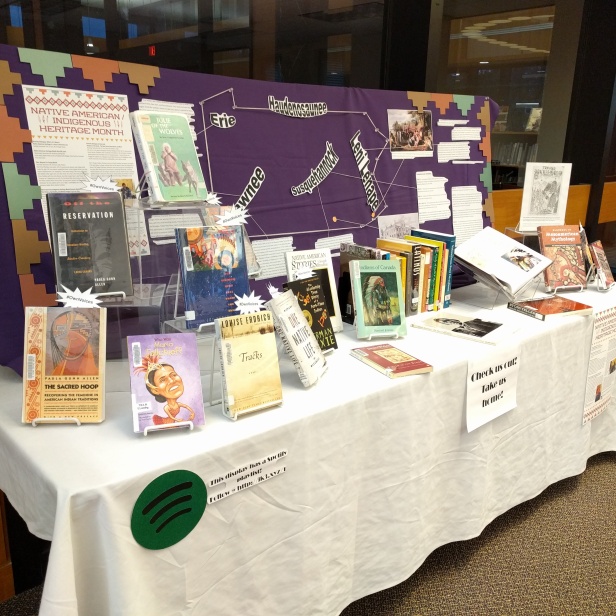 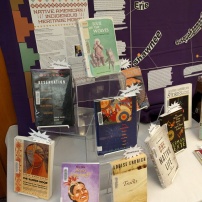 The frustration I felt while constructing the display made me think about how I have never actively sought out native culture or history. It was always just there for me to see if I wanted it. This was good and bad. Native heritage was normalized and in the open for me, but I didn’t have to do any internal work to understand it, and I didn’t realize how marginalized and mistreated our native people are. The answer is VERY. As I pulled books from our collection for the library display, I realized in horror that I hadn’t read a single one of them. I haven’t even read Sherman Alexie.

A quick aside about Sherman Alexie. I had the great honor of hearing him speak last month when he was in town for the ten-year anniversary tour of The Absolutely True Diary of a Part-Time Indian. I have never heard a more masterful storyteller. He blew me away. He spoke for 90 minutes and told this entwined tale of his childhood, his relationship with his mom, his health, his family, his relationship to his heritage, his relationship to white America, everything. He pushed boundaries and made us feel uncomfortable intentionally. It was glorious, especially since he was in a room with a bunch of neo-liberal elite folks, average age 60. I guarantee there were a lot of people in the audience who consider themselves allies, but as soon as you challenge them just a bit (as Alexie did), they get super defensive. As Jillian Michaels screams at me from a work-out DVD I hate, “Get comfortable with being uncomfortable!” Sometimes you have to admit that you are part of the problem. It’s the only way to become part of the solution.

Back to my focus: because I have neglected this pocket of literature, I made this list of native women (and feminist) authors to read. I picked just one book from each author based on whether the work focused on the female experience, but not all of them are 100% about women. You should also read everything these women have ever written. It was very hard to pick just one from each. And this is by no means a definitive list. This is just the tip of the tip of a huge iceberg. Indigenous women are incredible artists. Many indigenous cultures are matrilineal (the Haudenosaunee certainly are), so much of the culture is cared for by women. If you’ve read something by a native/indigenous woman and think I should pick it up, PLEASE let me know! I’m all ears. Otherwise, enjoy this list and buy some of these for your own collections and to give over the holidays.

Future Home of the Living God by Louise Erdrich: (This book is brand-spanking-new!!) “The world as we know it is ending. Evolution has reversed itself, affecting every living creature on earth. Science cannot stop the world from running backwards, as woman after woman gives birth to infants that appear to be primitive species of humans. Thirty-two-year-old Cedar Hawk Songmaker, adopted daughter of a pair of big-hearted, open-minded Minneapolis liberals, is as disturbed and uncertain as the rest of America around her. But for Cedar, this change is profound and deeply personal. She is four months pregnant…A chilling dystopian novel both provocative and prescient, Future Home of the Living God is a startlingly original work from one of our most acclaimed writers: a moving meditation on female agency, self-determination, biology, and natural rights that speaks to the troubling changes of our time.”

Yellow Woman and a Beauty of the Spirit by Leslie Marmon Silko: “Bold and impassioned, sharp and defiant, Leslie Marmon Silko’s essays evoke the spirit and voice of Native Americans. Whether she is exploring the vital importance literature and language play in Native American heritage, illuminating the inseparability of the land and the Native American people, enlivening the ways and wisdom of the old-time people, or exploding in outrage over the government’s long-standing, racist treatment of Native Americans, Silko does so with eloquence and power, born from her profound devotion to all that is Native American. Yellow Woman and a Beauty of the Spirit is written with the fire of necessity. Silko’s call to be heard is unmistakable; there are stories to remember, injustices to redress, ways of life to preserve. It is a work of major importance, filled with indispensable truths–a work by an author with an original voice and a unique access to both worlds.”

The Beginning and End of Rape: Confronting Sexual Violence in Native America by Sarah Deer: “Despite what major media sources say, violence against Native women is not an epidemic. An epidemic is biological and blameless. Violence against Native women is historical and political, bounded by oppression and colonial violence. This book, like all of Sarah Deer’s work, is aimed at engaging the problem head-on—and ending it…Deer provides a clear historical overview of rape and sex trafficking in North America, paying particular attention to the gendered legacy of colonialism in tribal nations—a truth largely overlooked or minimized by Native and non-Native observers. She faces this legacy directly, articulating strategies for Native communities and tribal nations seeking redress. In a damning critique of federal law that has accommodated rape by destroying tribal legal systems, she describes how tribal self-determination efforts of the twenty-first century can be leveraged to eradicate violence against women. Her work bridges the gap between Indian law and feminist thinking by explaining how intersectional approaches are vital to addressing the rape of Native women.”

The Sacred Hoop: Recovering the Feminine in American Indian Traditions by Paula Gunn Allen: “This pioneering work, first published in 1986, documents the continuing vitality of American Indian traditions and the crucial role of women in those traditions.”

She Had Some Horses by Joy Harjo: “In this powerful collection of poetry, Creek Indian Joy Harjo explores womanhood’s most intimate moments. Professor, poetry award winner, performer, and former member of the National Council on the Arts, Harjo’s prose speaks of women’s despair, of their imprisonment and ruin at the hands of men and society, but also of their awakenings, power, and love.”

Birdie by Tracey Lindberg: “Birdie is a darkly comic and moving first novel about the universal experience of recovering from wounds of the past, informed by the lore and knowledge of Cree traditions. Bernice Meetoos, a Cree woman, leaves her home in Northern Alberta following tragedy and travels to Gibsons, BC. She is on something of a vision quest, seeking to understand the messages from The Frugal Gourmet (one of the only television shows available on CBC North) that come to her in her dreams. She is also driven by the leftover teenaged desire to meet Pat Johns, who played Jesse on The Beachcombers, because he is, as she says, a working, healthy Indian man. Bernice heads for Molly’s Reach to find answers but they are not the ones she expected. With the arrival in Gibsons of her Auntie Val and her cousin Skinny Freda, Bernice finds the strength to face the past and draw the lessons from her dreams that she was never fully taught in life. Part road trip, dream quest and travelogue, the novel touches on the universality of women’s experience, regardless of culture or race.”

This Accident of Being Lost: Songs and Stories by Leanne Betasamosake Simpson: “This Accident of Being Lost is the knife-sharp new collection of stories and songs from award-winning Nishnaabeg storyteller and writer Leanne Betasamosake Simpson. These visionary pieces build upon Simpson’s powerful use of the fragment as a tool for intervention in her critically acclaimed collection Islands of Decolonial Love. Provocateur and poet, she continually rebirths a decolonized reality, one that circles in and out of time and resists dominant narratives or comfortable categorization. A crow watches over a deer addicted to road salt; Lake Ontario floods Toronto to remake the world while texting “ARE THEY GETTING IT?”; lovers visit the last remaining corner of the boreal forest; three comrades guerrilla-tap maples in an upper middle-class neighbourhood; and Kwe gets her firearms license in rural Ontario. Blending elements of Nishnaabeg storytelling, science fiction, contemporary realism, and the lyric voice, This Accident of Being Lost burns with a quiet intensity, like a campfire in your backyard, challenging you to reconsider the world you thought you knew.”

From a Native Daughter: Colonialism and Sovereignty in Hawai’i by Haunani-Kay Trask: “Since its publication in 1993, From a Native Daughter, a provocative, well-reasoned attack against the rampant abuse of Native Hawaiian rights, institutional racism, and gender discrimination, has generated heated debates in Hawai’i and throughout the world. This 1999 revised work includes material that builds on issues and concerns raised in the first edition: Native Hawaiian student organizing at the University of Hawai’i; the master plan of the Native Hawaiian self-governing organization Ka Lahui Hawai’i and its platform on the four political arenas of sovereignty; the 1989 Hawai’i declaration of the Hawai’i ecumenical coalition on tourism; and a typology on racism and imperialism. Brief introductions to each of the previously published essays brings them up to date and situates them in the current Native Hawaiian rights discussion.”