Thank you to Doubleday Books and NetGalley for providing me with an advance review copy in exchange for an honest review. 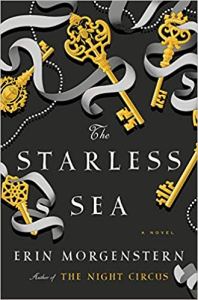 The Night Circus was a bit of a slow burn phenomenon for the bookish world. Over the 7/8 years since it was published, people have found it and fallen deeply in love with it at their own pace. I didn’t go crazy over The Night Circus when I first read it, but all these years later I find myself thinking about it a lot. The atmosphere, the setting, the magic, the character relationships. It really stuck in my brain, so I was very excited to hear that Morgenstern was finally coming out with a new book this year!

I was shocked when I saw The Starless Sea available for request on NetGalley. I had just assumed it would remain elusive and exclusive to only the most renowned of book reviewers. I was even more surprised when I was approved for the digital ARC.

A real quick synopsis: Zachary Ezra Rawlins is a grad student studying immersive media (video games) design and storytelling. One day he stumbles on a mysterious book in the library that appears to be a collection of short fairy tales and folklore. The thing is…a true story from his childhood is in this book. No one else knows this story but Zachary, and on top of that, the book looks to have been written way before Zachary was born. He starts to do some digging and in the process gets stuck down in a weird underground magical library where clothes are perfectly tailored for him and the food is exactly what you need and cats wander everywhere. But there is like, no one else in this library. The space itself is confusing and labyrinthine, and time and place don’t hold much power.

Zachary learns about a mystical starless sea that is accessible through the underground library. He also learns about a woman trying to close the doors that lead to the library. She’s stealing books, cutting off hands, and shutting down access to the library, but Zachary doesn’t know why. He teams up with a pink-haired manic pixie dream girl named Mirabel to save a hansom silver fox named Dorian from this woman’s clutches, but he has no idea who he should actually be trusting. And then, a bunch of stuff happens but nothing actually happens, people are and aren’t who you think they are, and then the book ends. Sorry, I can’t really describe the plot of this book for multiple reasons.

I was so excited when I began reading it, but I’m sorry to report that my excitement dissipated pretty quickly and was replaced by frustration and even boredom. I will have an unpopular opinion about this book, and that’s fine. I’m honestly very happy so many people seem to be enjoying it! It really wasn’t for me, however. Morgenstern’s writing is absolutely stunning, and the worlds she creates are glorious. I want to revel in them. But I need a good plot to take me through those worlds, and this just didn’t deliver.

As I began reading The Starless Sea, I felt a lot of the same things I felt when I began The Night Circus: the story was atmospheric, creative, rich…and kind of hard to get into. The reason is different, however. The Starless Sea is written in a very fractured style, with vignettes of various fairy tales and folklore spliced in to the main narrative. Some of these short stories are connected to each other or the bigger plot in direct ways, some are not. While they are beautiful, it makes the overall reading experience a bit taxing.

The true harm in this style lies in the character development. It felt incredibly shallow to me. Despite the book being 500 pages long, I felt no attachment to any of the characters, especially the characters in the main narrative. You don’t get much about them, their histories, their likes or dislikes, their internal struggles. When things happen to them or when they feel big emotions or have to make big decisions throughout the book, you don’t feel a stake in their success, failure, or well-being. And many of the decisions they do make feel very out of left field because, well, I don’t know them well enough to know what would make sense for them to do or not do! There are several romances that truly do seem to come out of nowhere, and that really annoyed me.

The stakes throughout The Starless Sea felt both very high and very low. The action, when it happened, was grandiose and urgent. But there was no indication how the main conflict would impact the characters or the world. Barely any explanations are given for what happens in this book. Why did I care that doors were being closed? Why do I care that these characters are being forced into a weird underworld library situation with demon owls and strange bees (I just made the book sound more interesting than it actually is there)? Why do I care about special magic books being stole or misplaced??  What is the starless sea? There are no clear answers to any of this stuff. 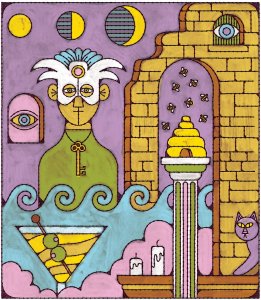 Illustration by Nolan Pelletier for the NYT Book Review

You might have guessed by the description, but this book is a celebration of story and it’s power over the universe. It emphasizes that focus over everything. Specific books are mentioned throughout, and others are hinted at. If you spend a lot of time around books you’ll be able to guess those ones as well. For a bibliophile, it feels like a fun treat, an Easter Egg, but it doesn’t lend much to the plot. And while The Starless Sea does a lot of praising story, it also presents story as a dangerous, destructive force. And in my opinion, it actually fails at being a good story itself. Perhaps it is a good abstract meditation on the complexity of story, but as actual story goes, I found it lacking in multiple ways.

It’s not until about 65% of the way through the nearly 500 page book that we start to see the loose ends connect. Stories that seemed like fragments start to click together, albeit in obscure ways. Others are never resolved. The book ends with a lot of ‘huh??’s coming out of my mouth. There is an ending. It’s not completely ambiguous, but there are lots of loose ends and sad resolutions. It did not feel satisfying at all, especially after slogging through 500 pages of constant whiplash. Throughout the book, questions about the characters, their pasts, and their connections to each other are dangled in front of us. We crave that resolution, and for most of the book we only get more out-of-place details that feel incredibly fractured.

So yes, I was disappointed in this long-awaited fantasy from a beloved author. But it wouldn’t be the first time and it won’t be the last. How did you feel about The Starless Sea?